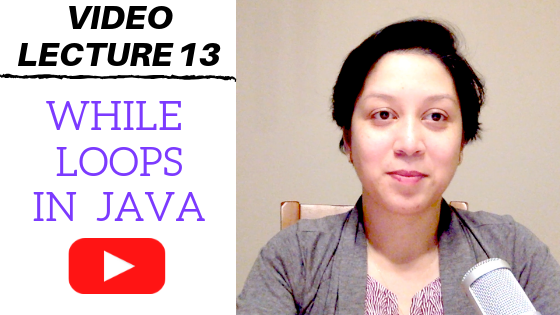 Java has three types of loops: (1) for loop, (2) while loop, and (3) do-while loop. This post focuses on while loops in Java. In the video-lecture associated with this post, we compare side-by-side for loops and while loops.

While loops in Java

The while loop in Java has the following structure.

Problem Used in the Video

Print all the numbers between 1 and 10, separated by spaces. That is, the terminal output should look like the following one.

The solution using a for loop is provided below.

The solution using a while loop is provided below.

Here is the video lecture.

We are going to discuss another looping technique known as While-Loop. Everything we did using Java for-loops in the previous video lectures can be done using while-loops. Watch the video till the end for a detailed explanation on while-loops, a comparison between Java for-loops and while-loops, and a coding-example to explain how while-loops work.

While loop in Java

while (condition){
// The code-block under the scope
}

In the while-loop structure, you have a “condition” to control the repetition of the loop. As long as this condition is true, the execution will keep going inside the while-loop and run the code-block again and again.

Inside the code-block, you can write something that will make the condition false after some number of iterations.

For loop in Java

for (initialization; condition; change){
// The code block under the scope
}

Initialization and change in a while loop

initialization;
while (condition){
// The code block under the scope
change;
}

Let us discuss this using an easy-to-solve example problem. Let us assume that the problem is to print all the numbers between 1 and 10 separated by spaces.

We are starting with a for loop

We can quickly write  a for-loop, in which we use an integer variable i to control the loop. In the initialization, i is equal to 1. The condition is that i  is smaller than or equal to 10. That means, as long as, the variable i remains within the range of 1 to 10, the loop will keep repeating. At the end of each iteration, i will increment by 1, as stated by the third part of the for-syntax.

We print the variable i inside the code. We put a space after i, so that on the terminal a gap is created between the current value of i and the next one.

Please save the file, compile it, and run the generated class file. All the integer numbers from 1 to 10 are printed on the terminal.

Now, we will use a while-loop instead of the for-loop to do the same task, that is printing the numbers from 1 to 10.

Difference between a for loop and a while loop in Java

Notice that there are some structural differences between a for loop and a while-loop. The basic while-loop only has the “condition” part for which the iteration will go inside. We will include the initialization part outside the while-loop, and the “change” part inside the code-block of while-loop.

Using while loop in Java

Let us keep the line that contains System.out.print  and delete the for structure.

For the initialization of i, let us write i=1 before the while statement.

Note that after this code segment executes, a number is printed and the value of i becomes one more than the number that was printed.

This line i=i+1 is responsible for the increment of i. Now, notice that the initialization is i=1. The loop will iterate and at the end of the iteration, the value of i will increase. We need to write a condition within the parentheses of the while-statement. The condition should be such that, the execution goes inside when the value of i is smaller than or equal to 10.

The condition is exactly the same one we had in the for-loop.

The output of the new program

This newly written code is an alternative of the code we wrote using a for-loop. The output of the code should be the same as before.

Let us save the file, compile the code, and execute the generated class file. Notice that we have exactly the same output, where we have all the 10 numbers starting from 1 and ending with 10. The numbers are separated by spaces.

In reality, the for-loop and the while loop can do the same thing.

I hope the concept of while loop is clear to you. Please let us know if you have any question through the comment section below. If you haven’t subscribed to our website Computing4All.com and to the YouTube channel where this video is hosted, please do so to receive notifications on our new articles and video lectures. We wish you become successful in learning to code. Again, please do not hesitate to contact us via the comments section below, if you have any question. Or, even to introduce yourself. See you soon in another video.

I am an Assistant Professor in the Department of Computer Science at the University of Texas at El Paso (UTEP). My specialty is Data Science, with a focus on information retrieval and applications of cybersecurity.