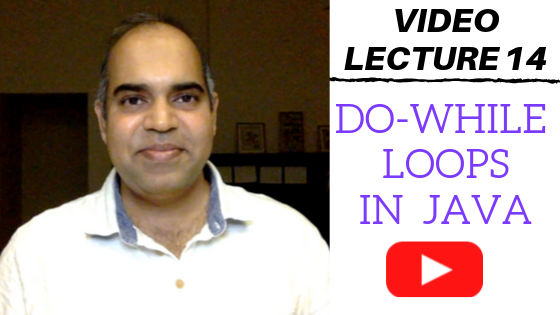 Java do-while loop is one of the three looping techniques available with the language. The other two loops are: for loop and while loop. do-while is a little bit different than for or while loops. In the “for” or “while” loop, generally, a condition is checked in the beginning to realize whether the execution should go inside the loop, or not. In contrast, do-while checks for the requirement of iteration at the end of the loop. As a result. do-while would execute the code-block inside the loop at least once.

Problem Used in the Video

In the video, we demonstrate how to write a program using java do-while loop to repeat the same task based on user preference. The task that the program repeats is the addition of two number provided by the user. The following image provides a screenshot of the program.

Notice that the program asks for two numbers from the user. The program prints the summation of the two numbers. Then it gives the user to enter ‘y’ to continue and any other letter to quit the program. The user repeats the task several times by entering ‘y’. When the user enters ‘n’ to quit, the program outputs “Good bye.” and terminates.

We wrote the program using a Java do-while loop. Here is the solution.

The solution is provided in the space below.

The video lecture below explains a lot of details on Java do-while loop.

Why do you need a do-while loop?

Hi, I am Dr. Shahriar Hossain. Today, I am going to explain do-while loops in Java. From the previous videos, we are already familiar with for-loops and while-loops. Now the question is, why do we need a third type of loop, named do-while? Its a Good question. A do-while loop is a special kind of looping technique that is suitable for a situation when execution of a code-block is required at least for once.

Moreover, if you have to sit for a programming exam, or go for an interview, you absolutely need to be familiar with do-while loops. Do-while is one of the three looping techniques. As a programmer, we should be familiar with all the three type of loops: for, while, and do-while.

Anyway, let us take a quick look at the structure of a do-while loop.

What is a common use of Java do-while loop

<<Show the terminal output of the program first>>

Let us write code for this program.

At first let us write a program that asks for two numbers, reports the summation result, and then terminates. Later we will modify the code to repeat the task.

We already know how to write a Scanner object and ask the user to enter two numbers. We keep the two numbers in two variables named a and b. After receiving the numbers from the user, all we have to do is, to print the summation of the two numbers.

If we compile the java file and run the generated class file, we will notice that the program asks for two numbers from the user, then the program reports the summation, and finally the program terminates.

Now, what we want to do is the following – we want to use a do-while loop to repeat this part of the code, where we ask the user for two numbers, and then print the summation result.

Let us write the “do” syntax, and put our code inside the scope of the loop. The loop ends with the syntax “while” and then in parentheses we will need to provide the condition that is responsible for the repeat. Note that we have to put a semicolon at the end of the do-while loop.

Now, we still do not have any information that we can use for the condition that should go here. In fact, with the current code-block, we did not collect any information from the user regarding her or his desire to repeat the addition for another set of numbers.

Let us declare a character variable that will help us to store a letter representing user’s desire to repeat. A character variable is able to keep only a letter, digit, or a symbol in it. For example, at can hold, ‘a’, ‘b’, ‘c’, or any letter. A character can hold even a digit like ‘1’ or ‘2’, or ‘3’. It can even hold symbols like ‘+’, ‘-’, or ‘*’. There is a wide range of characters, letters, digits, or symbols that it can hold.

We use the scanner object to get the user input for a character value. Unfortunately, the scanner object does not have a direct method to read a character. We have to read whatever the user enters using a the next() method. We have to keep the information in a String object. str is the String variable. Then we have to retrieve whatever we have in the first position of the String str and put it in the character variable decision. The value zero in the parentheses of charAt gives the first character. Characters in a String starts from 0. That is, the first character of a String has a location of 0, the second character has a location 1, the third character has a location of 2, so and so forth.

If we find that the variable decision is not ‘, then we do not have repeat anymore.

Now, notice that the repetition of this do-while is dependent on whether the variable decision is ‘y’ or not. Therefore, we can write the condition here as decision ==‘y’. That means, if the decision variable is the character ‘y’, then repeat, otherwise do not repeat.

Single quotes for a character

Note that a character is placed within a single start quote and a single end quote. Without the quotes, the compiler will think that ‘y’ is a variable and will throw and error stating that the variable y is not declared in this program. Therefore, to indicate that we are referring to the exact character value ‘y’, we have to provide the single quotes.

Save, compile, and run

Notice again, how we wrote our program. The code block executes at least once. The decision whether to repeat the code-block or not is made at the end. This structure of do-while is different than for loop and while loop in this way.

Through this video, we have covered the third looping technique used in Java.  We already learned nested for-loops one of the previous videos. Similar to nested for-loops, you can write nested do-while loops. You can even write one do-while-loop inside a for-loop, or even one for-loop inside a do-while-loop. I hope the concept of looping is clear to you. Please let us know if you have any question through the comment section below. If you haven’t subscribed to our website Computing4All.com and to the YouTube channel where this video is hosted, please do so to receive notifications on our new articles and video lectures.

We wish you become successful in learning to code. Again, please do not hesitate to contact us via the comments section below, if you have any question. Or, even to introduce yourself. See you soon in another video.

While loops in Java: Video Lecture 13