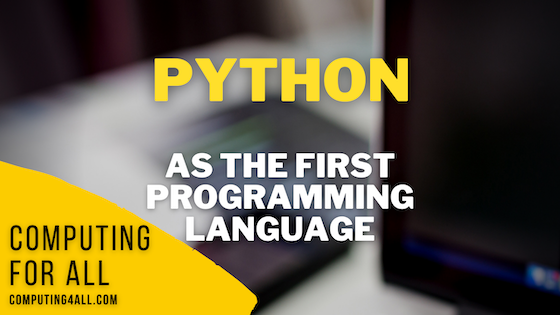 Python is an easy-to-use, comprehensive and powerful language. Since Python is easy to use, many experts recommend it as an excellent first language for beginners. Do I consider Python to be an ideal language for first-time programmers?

In this article, I explain when to learn Python as the first programming language, when to choose it as the second, and why one should even consider learning to code in Python.

When to learn Python as the first programming language?

If you are planning to gain programming expertise in addition to your major skills (such as engineering, scientific, social scientific, or business skills), then I would suggest that you learn Python as your first programming language.

Why am I recommending you to learn Python as your first programming language but not other languages like Java or C++?

If there are some errors at the end of your program, Python will keep running your code till it hits the error and cannot run anymore. In languages like Java or C++, the program will not run (nor even compile) if there is a syntax error in your code. That means Python is an interpreter, or it directly executes your code line by line. Java and C++ are compiler-based languages. You have to compile your Java code, generate a program, and you will need to run that program. With any error, the compiler will not create the program from your code. Therefore, running a program partially before hitting the error is not an option in Java and C++.

Since Python is an interpreter, it is easy to be handled by first-time programmers.

Before you learn your first programming language, it is also essential to know that you will learn invaluable skills whatever language you choose. Since Python is easy to learn, it is a great programming language to advance your career. Python can be very useful if you are working in the scientific, business, analytics, or engineering fields.

When to learn Python as the second programming language?

Some situations when you might want to consider Python as your second programming language are as follows.

Why should anyone prefer Python programming language?

Whether it is the first programming language or the second or third, you should start learning Python now because this language allows you to do quick prototyping. You can build complex software in days, while with Java or C++, you could spend weeks.

A wide variety of tools and packages are available with Python to do a gazillion amount of work — from programming robots to interfacing to breadboards (circuits) to web-scraping to natural language processing to machine learning and whatnot. With the advent of Django and Angular, Python has become more popular than ever, combined with web-based systems.

What does a data scientist do?