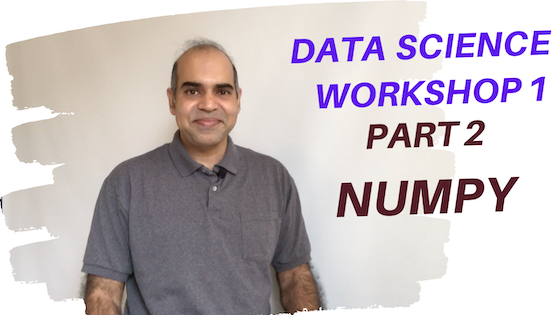 Hi, I am Dr. Shahriar Hossain. Welcome back to Part 2 of Data Science Workshop 1. We barely started to discuss NumPy in the previous video. Let us begin from where we left in the last part.

NumPy is an excellent package to keep datasets in the main memory. The Package has ample mathematical functions that are basic to many machine learning algorithms.

I can click this play symbol to execute the line. Alternatively, I can hit shift plus enter or shift plus return on a mac to run a line. Again, I am using Google colab as my Python editor. This editor on the screen is like Jupyter Notebook. I can just write the variable name, such as list1, and then press Shift+Return to see what the content of the variable list1 is. The content is printed.

If you are using a regular Python editor, such as Spyder, then you will have to use the print function to print the content of the variable list1.

Now, I want to create a NumPy variable. Let us import the package NumPy as np. Therefore, I can use this variable np to call NumPy functions.

I can create a NumPy array that will copy all the elements from list1. I use np.array and in parenthesis, I can provide the Python list I already have. I will save this newly created NumPy array in a variable named arr1.

I will create a second NumPy array called arr2, which will copy the content of list2. So, arr2 is a NumPy array.

What does + do for two python lists?

As you know, Python is a flexible and versatile language. Unlike programming languages like Java, you can use the plus (+) operator on two arrays or lists. What will happen if we apply the operation list1+list2?

What does + do for two NumPy arrays?

Let us see what happens if we add two NumPy arrays, arr1 and arr2.

This demonstrates that NumPy is actually equipped with mathematical functions.

As a quick example of matrix operations, I will create two matrices.

I can create a matrix with two rows and three columns like this.

Let us create another matrix with four rows and three columns. Save it in a variable named d2.

I should be able to do a multiplication between these two matrices d1 and d2.

Matrix multiplication is important because we can consider that a matrix is a tabular dataset. Many of the algorithms in machine learning use matrix operations.

At this point, I told the audience that I just wanted to demonstrate a few things about NumPy because it is a basic data structure quite commonly used by many of the algorithms. NumPy pops up very frequently for data science practitioners who write programs to solve analytic problems.

You can download the code, for Google Colab or Jupyter Notebook, from this link 1_numpy.zip (please unzip to get the ipynb file.)

The code is also provided below (for a regular Python editor like Spyder.)

Now we are moving to Pandas. The Pandas library help in reading from a csv or an excel file, write to a file, manipulating tabular data, exploring the data, and do a little bit of cleaning when required.