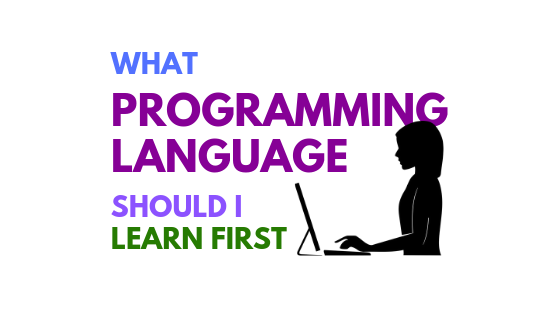 Although it is difficult to answer what computer language one should learn without knowing the specific objectives, we can mention that Python has become quite popular as a first language because one can master it quickly and develop applications that serve a wide variety of purposes. If someone can manage the time, we would recommend learning Java or C++ first because after learning Java or C++, one can learn Python or any other language pretty quickly. This article describes in detail which computer language to choose as the first programming language and how to choose it.

There is a common misconception that only people from Computer Science can learn programming. The fact is, many early Computer Science professors were physicists and mathematicians. Programming is advancing and becoming more and more high-level (human-interpretable) day by day. As a result, the concept that programming is only for nerds is changing. 🤓 Learning to program has become common in business and scientific sectors. We still have miles to go in shattering all the misconceptions and seeing programming as a general skill though.

What programming language should I learn first?

We have an excellent answer for you, but before we give you a superb answer, we will provide a brief explanation. The short answer to the question, “what programming language should I learn first” is “it depends.” We are sure the next question is, “it depends on what?” It depends on your computing needs, your current expertise level, and the learning resources that are available to you.

Let us move to the great answer to the question of what programming language to learn the first time, which is an elaborate version of “it depends.” As mentioned before, it depends on your particular situation. The following subsections explain several cases and the programming language(s) suitable for each case.

On a similar spirit, we would suggest Matlab if you have access to it. Matlab is not free. Most universities purchase Matlab subscriptions for faculty, staffs, and students. Unless you get it as a part of your job facilities, we suggest you avoid it because it is an expensive piece of software. Matlab is mathematics-oriented and requires an understanding of vector and matrix operations. You can safely ignore Matlab unless your projects specifically need complex mathematical operations.

Let us assume that you can find a mentor. The mentor could be someone or some organization offering courses on Java, C++, and Python. Let us also assume that you are willing to spend some money to enroll in a class. In this particular situation, we would suggest you learn Java.

If you are wondering why we are recommending Java as your first course, you have the perfect question in mind. Java is more generalized than C++. When you use Java, the programs you write using a Windows computer run fine on Mac and Linux systems. As a result, Java reduces the complexity of learning a programming language a lot.

Then, why not Python? Python is a great language. Researchers in our labs prefer Python over Java because Python programs are shorter in length, hence quicker to code. Note that we are not talking about what is a better programming language; instead, we are discussing what language one should learn first. After you learn Java, you will have a basic understanding of a standard programming language. As a result, learning Python and C++ by yourself will be just a matter of time.

If you are in college now

If you are in college now and if you are in a discipline other than Computer Science, you can go for an early stage Computer Science course. Most undergraduate programs in the US universities allow at least one free elective course as a part of the undergraduate degree program. A free elective course is any three-credit course from any discipline regardless of your major.

We are providing three ideas involving which course(s) to go for below.

If you are confused about whether you will be able to do well in CS1 or not, you can speak with the professor who is serving as the Undergraduate Program Director in the Computer Science Department. When you talk to the Undergraduate Program Director, mention that you want to do your free elective in Computer Science. The program director will be able to suggest the right course for you. If you are not comfortable with going for CS1, the Program Director will probably recommend going for CS0, which we explain below.

A Computer Science Department generally designs the CS0 course with content from problem-solving and programming. The course also contains the history of Computer Science and how computers work. CS0 is a great early stage course that counts toward any undergraduate program as a free elective. If you are not in Computer Science and if you would like to know about programming without diving too much into the details, we think, CS0 is an excellent course for you.

Please make sure to speak with the Computer Science Undergraduate Program Director if you have any question. Different Computer Science Departments have different requirements for a minor. We would suggest not to delay the graduation more than a semester for a minor. If at all possible, we suggest you go for summer courses to make sure you graduate on time.

If you are an early-stage college student, you can plan well right now to go for a minor in Computer Science. One good thing is that at least one of the additional courses will count as a free elective in your major program. One caveat is, if one of the Computer Science courses required for the minor has a non-computer Science prerequisite, you might have to complete that prerequisite first.

Why learning to code is becoming popular

Inclusion of coding in high and middle schools is becoming popular. Even some elementary schools expose their students to coding to some extent. We believe every college graduate will have some level of programming skill by the end of the coming decade. It is great to think that the future generation will have the programming skill as the nation and the world need. A sad part of the transition is that industries adopting new technology always create pressure on the previous generation.

Similar to the issues of automation, think about the new generations who will have programming skills regardless of their majors. There is a chance that corporate personnel, accountants, and office managers produced form the new generation will replace the earlier workforce in many sectors, especially in Business. This is one of the reasons to keep oneself up-to-date with the current technology in his/her line of work.

What is the difference between programming and web development

We have one more item to clarify. What is the difference between programming and web development? We need to discuss this because many people, including freshman Computer Science students, confuse programming with web development.

In this article, we talked about programming using a computer language. We are NOT discussing web development languages.

What else should a beginner know about programming

Programming is an excellent skill to achieve and master. We believe that anyone can learn to code and gain programming skill. Programming is a great tool to address one’s computational needs. That said, one cannot master the skill without passion and hard work. Be prepared to go through the frustration when you are learning to code. No one learns the first programming language without obstacles. Have patience and face the challenges. Practice makes women and men perfect in programming. 🤓

I am an Assistant Professor in the Department of Computer Science at the University of Texas at El Paso (UTEP). My specialty is Data Science, with a focus on information retrieval and applications of cybersecurity.

Learning to Code: Who should Learn it and Why