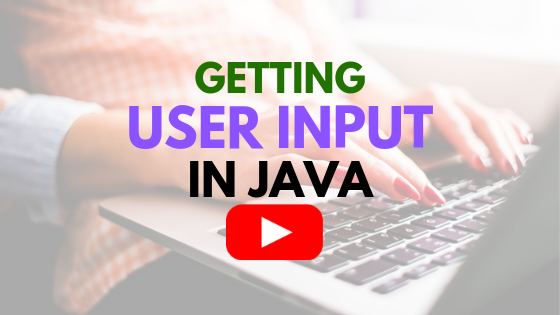 I am writing this article in support of the video we made on the topic — Getting User Input in Java. The video helps new learners by providing explanations on how to develop a simple calculator program. The user of the program types on the keyboard to enter two numbers. The program captures the two numbers the user provides and then it applies addition, subtraction, multiplication, and division operations on the numbers.

Why a Programmer Needs to Know About User Input

A programmer needs to know about user input due to the tremendous need for user input in many modern day software pieces. Consider the calculator program you have on your phone or laptop. It requires your input to apply mathematical operations. Consider editor software like MS Word. We type on the keyboard, and MS Word saves what we type. MS Word helps us format what we want to print.
Consider the Google Maps App on your smartphone. You write a destination address, and the software provides you directions to the destination. That is, the program reads the address you provide.

Therefore, getting input from the user is quite common in computer programs.

The Video: Getting Input from the User, for a Calculator Program, Using Java

Getting input from the user is an essential part of programming. It can be intimidating for beginners. With some practice, writing Java code to get input from user becomes quite mundane over time.

The Final Program Used in the Video

In the video, we only covered how to get user input of double data type using a Java Scanner object. The programmer can use nextInt() instead of the nextDouble() method to get an integer from the user. The program that we came up with, for double numbers, in the video is provided below. Save the program in a file named MyProg.java.

Write a program that does the following items.

You will see more of user input in our future videos. To stay in touch, please subscribe to our YouTube channel:

Hi,
I am Dr. Shahriar Hossain. I am here today to help you practice more on variables. We will build a Calculator program today using Java.

From the last video lecture, you know how to add two numbers and how to subtract one number from another. In the exercise, which I provided on Computing4All.com, I asked for multiplication and division as well. I will extend the concept that I described in the previous class. I will write the code of the last lesson and also do the exercise, which is the inclusion of multiplication and division. That should be good enough for a quite primitive calculator.

One item is that in our code, we are hard-coding the numbers so far. That is, every time we change the numerical values of the variables, we need to compile the code to generate the class file because of the change. In an ideal program, the program should ask the user for two numbers, and then the program should do whatever mathematical operations it is supposed to do.

I will now share my screen with you so that you can see how I write the program. I will keep explaining on the way.

The starting of the code

Let us declare two Double variables. We already know how to declare two Double variables from the last lecture. The names of the two variables that will become our operands are num1 and num2. I declare the first one by stating “double num1;”, and the second one by “double num2;”. I should mention again that we have to put a semicolon at the end of each instruction. The line public static void main is not an instruction. It is defining where is the starting of the program is. Therefore, public static void main does not have a semicolon at the end. Over time, we will see that there are statements in Java for which we do not put semicolons.

An Instruction is a unit task. In general, each instruction inside the main method must have a semicolon at the end.

Anyway, I declare another double variable named res, in which I will put results of the mathematical operations addition, subtraction, multiplication, and division.

So far, we declared all the variables and initiated num1 and num2 with operands. I will first add the two numbers in num1 and num2 and put them in the “res” variable.

To be exact, the output will be “Summation: 37”

Now, we would like to do the subtraction. Notice that after printing the summation result, we can reuse the “res” variable for any other operation. We will subtract. So, we write “res=num1-num2;”

We write a System.out.println instruction to print the subtraction result.

After you have written the code for all four operations, compile and run the program. We can see that results of all the operations — addition, subtraction, multiplication, and division — are correctly printed on the terminal.

Hard-coding is not a good idea, in this case

While I like the code so far, notice that for a pair of new numbers in num1 and num2, we have to recompile the code and run again, which is not a good idea for software development. The user does now know how to compile or change the code. Therefore, we need to modify the program in such a way that the program asks the user for two numbers, and then the program outputs the results of the mathematical operations carried over the two numbers that the user provided.

Assigning values directly in the code like the ones we have done here, is called hard-coding. Instead of hard-coding the numbers we will change the code so that the program asks for input to the person who will run the program.

Getting user input in Java may not look straightforward

Getting input from the user is not entirely straightforward. I will introduce a few new items regarding getting information from the user. The items might not make much sense at this point because we are still not familiar with methods, classes, and objects. We will be using the new items to get input from the user. Much later, when we learn advanced topics, we will understand the inner functionality.

Anyway, to enable your code to get inputs from the user, you need to use the Scanner class, which we are not familiar with at all. At the beginning of the code, even before the first line, now we have to write “import java.util.Scanner;”. For now, the explanation that might make sense is the following — this particular class “Scanner” has the functionality written in it that allows a program to get user inputs. Through this line, your program is telling the Java Virtual Machine to import that functionality of scanning numbers from users.

Getting user input in Java: The nextDouble() method

Previously we assigned 25 to num1 and 12 to num2. These two lines must change because we are not hardcoding anymore. Instead, we will tell the computer to copy the number that the object “scan” captures to the variable num1. In the right side of the assignment operator of num1, we write scan.nextDouble();

Now let us do the same for num2. In the right side of the assignment of num2, we will write scan.nextDouble();

In this line, the program will wait for the second number to be entered by the user.

Now, the program is ready. Save the MyProg.java, and compile it.

Notice that the program is again waiting. It is because now the execution is in the line “num2=scan.nextDouble();” The computer is waiting at “scan.nextDouble()” for the user to enter another number, which the computer will put in variable num2.

Once num1 and num2 are ready, the computer will execute the rest of the lines in a jiffy. That is, the summation, subtraction, multiplication, and division results will be printed as soon as the num2 variable receives a value from the user. Now, I will hit enter, and the program will print all the results.

The user can run the program again and again. Each time the program will wait twice for two variables, num1 and num2.

One thing that I would like to include in the program is a message on the terminal before the program starts waiting for num1. I would like to add System.out.println and then write “Enter the first number: ” inside the parentheses inside quotations.

Similarly, before the scanner waits for the second input from the user, I would like to print on the terminal “Enter the second number: ” using a System.out.println method.

Notice that this version of the program is more user-friendly since the program is communicating with the user by providing guidelines like, Enter the First number, or Enter the second number.

If you have any question, or if you are struggling to compile and run any of the programs we discussed so far, please do not hesitate to contact us via Computing4All.com or by leaving a comment in the comments section.

Thank you for watching the video. We will be coming back soon with another video in this video lecture series. To stay in touch, please subscribe to Computing4All.com and to our YouTube channel.

An Introduction to Variables in Java: Video Lecture 2