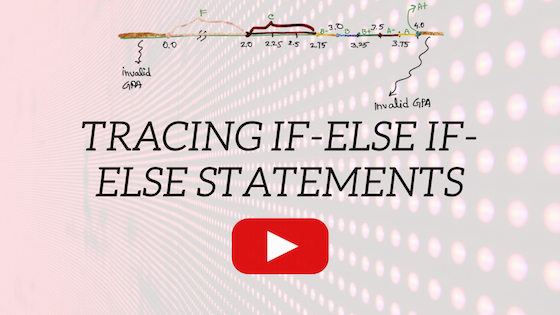 In the previous video-lecture, we described how if-else if-else statements work. We provided an exercise with the video-lecture. In the video with this article, we provide a solution to the exercise.

In the following video, we introduce a technique called tracing that we did not cover before. Tracing is way to analyze a program. Sometimes, the variable space is so large that correctness of the code needs to be checked conceptually. Tracing by hand is a great way to analyze code for correctness.

The video: An exercise and the solution

The if-else if-else exercise (from the previous video post)

We always say that it is better to type your own code because the practice of writing the code connects you with the solution. We are still providing the code below as a reference. If you decide to use the code, please save the code in a file named Exercise.java because the class name is Exercise.

This is Dr. Shahriar Hossain. In the last video lecture, we discussed “if-else if-else” statements. On our website, we provided an exercise. Today, we are going to solve that exercise. If you have already solved the exercise that we provided with the last video lecture, I suggest, please still watch this video till end because it contains some analysis using tracing. Tracing is a technique that helps us analyze our code without running it enormous amount of time with different inputs.

Oh, one thing before we start working on the exercise, please subscribe to our website Computing4All.com and to this YouTube channel to receive notifications about our articles and video lectures.

I will not keep you waiting anymore. Let us work on the exercise.

You can see the description of the exercise on the screen now. The exercise states the following: Write a program that asks the user for a GPA on a scale of 0.0 to 4.0. If the user enters a number larger than 4.0 or less than 0.0, the program must output “Invalid GPA.” If the user enters a valid number, the program should display the corresponding letter grade based on the table below.

Then the table provides bunch of ranges for different grades.

We will analyze the problem a bit now.

At first, I am outlining the range of GPA. Valid GPA may vary between 0 to 4.0. I am drawing the ranges that are mentioned in the description of the exercise. As described in the problem, any GPA greater than 4.0 should be “Invalid.” Also, any GPA smaller than 0 is “Invalid.”

Now recall, from the table that the letter grade A+ is assigned to GPA 4.0 only.

Valid grades less than 2.0 result in an F.

The idea of the solution

The idea of the solution is that we will use if-else if-else statements to display the letter grade corresponding to a given gpa.

Starting of the code

Let us write the code. I have already written the class name and the header for the main method. The file name is Exercise.java.

I will write the code to collect the GPA from the user. I will keep the GPA in a variable named gpa, which is of “double” data type.

Based on what is inside the variable, gpa, I want to display the corresponding letter grade. In our figure, we started to draw the ranges from right side. That is, from larger gpa to smaller gpa. I will write the code in the same order. That is, I will first write an “if” statement to cover the gpa greater than 4.0. Notice that all gpa’s greater than 4.0 should be marked as “Invalid GPA” because the valid gpa range starts at 0.0 and ends at 4.0.

All I have to write is, if gpa is greater than 4.0, then print “Invalid GPA.”

Now, the next item in the right side of the figure is, 4.0. At 4.0, the letter grade A+ should be printed. The idea is, I will use an “else if” statement to cover 4.0. I am writing else if, gpa is equal to 4.0, then print “A+”. Notice that the equality comparison has to be with two “equals” symbols. We discussed in an earlier video that the equality comparison is always with two equals symbol, not one. A single equals symbol is used for the assignment operations.

The next grade letter is A. GPA A may start at 3.75 and must be less than 4.0. Therefore, I add another else if statement, in which I write the condition gpa>=3.75. When the condition is satisfied, we print the letter grade “A”.

Let me quickly write the code up to B-, using concepts similar to what we have discussed so far.

Now, notice that the range for C is a bit large. It starts from 2.0 and is less than 2.75. In our code, we provide that condition in the “else if” statement for the letter grade C.

So far, we have all the letter grades in the code. We also have the invalid grade that is greater than 4.0. The only item that is left out is any invalid gpa that is smaller than 0.0. Notice that we do not need another “else if” for that because it is the only situation that is left out. Therefore, we can use “else” without any condition for any gpa lesser than 0.0. We write “Invalid GPA” on the terminal if the user enters any gpa that is negative.

The code is complete. Let us save the file and compile it. I will run the program several times with different gpa values. Notice that all the grade letters are correctly printed.

Let us manually trace the code a bit for clarity. When you run the program, the Java virtual machine will attempt to execute each line in the main method in a sequence as they appear.

A variable named GPA is created. The Scanner object named “scan” is created. Then, on the terminal “Enter the GPA, please” — this sentence is printed. Then the user enters a GPA and hits the enter button on the keyboard. The computer receives the value of the GPA in the variable named “gpa”. Now the “if-else if” statements of the code will execute, as required. Consider that the user entered a GPA of 3.3.

Now the computer will check if the variable “gpa” is holding anything greater than 4.0. Since 3.3 is not greater than 4.0, the statement “if gpa>4.0” results in false. Therefore, the corresponding System.out.println “Invalid GPA” will not be executed. Since, “if gpa>4.0” is false, the computer now will check the next “else if” statement, which is gpa==4.0. GPA 3.3 is not equal to 4.0, therefore, the statement “else if (gpa==4.0)” is false. Since, it is false the execution will not go inside its scope. Therefore, “A+” will NOT be printed.

The next item the computer will check if gpa>=3.75. GPA 3.3 is not greater than or equal t 3.75. Therefore, this condition results in false.

We are tracing for the variable gpa, when it is negative 5 point 0. In the first “if” statement, gpa>4.0, the condition is false because -5.0 is not greater than 4.0. Therefore, the corresponding System.out.println is not executed.

For the next “else if” condition, gpa==4.0, the resultant Boolean value is “false” too.

Notice that, for gpa negative 5 point zero, none of these conditions will result in “true”. Therefore, the execution will end up going to the “else” statement. Once, the execution goes to the “else” statement, the computer executes every instruction under the “else” scope. In our code, the only statement written here is System.out.println “Invalid GPA”. Therefore, the computer will execute it and “Invalid GPA” will be printed on the terminal.

Notice again that when, all the “if” and “else if” conditions result in false, only then the last “else” is executed.

Let us quickly do another tracing for GPA 3.6. gpa>4.0 is false because 3.6>4.0 is false. The next, condition gpa==4.0 is false too. Even the next one, gpa>=3.75 is false. The next “else if” condition gpa>=3.5 is true because 3.6 is greater than 3.5. Therefore, the execution will go inside the scope of “gpa>=3.5”. The computer will execute System.out.println “A-”. No other condition will be checked because already a condition in this sequence of “if – else if” statements is true. The execution will jump to the end of this “if-else if-else” sequence.

I hope the “if-else if- else” statements are clearer with the video lecture today. Please do not hesitate to ask any questions you may have via the comments section below. We will be happy to be with you on your journey to learn programming.

An introduction to Java for loop: Video Lecture 9