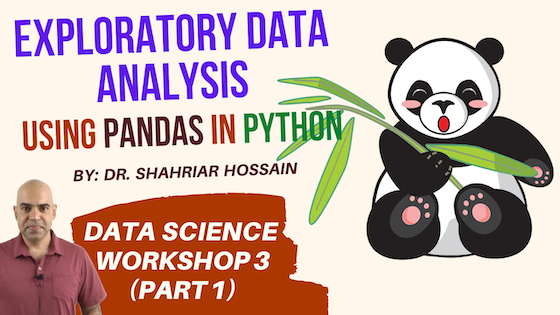 Today, I will describe an initial way of exploring and analyzing data using Pandas in Python programming.

Exploratory Data Analysis (EDA) is a process, not just one algorithm. The process leads to the generation of a good dataset for statistical and machine learning modeling.

Unfortunately, or fortunately, Exploratory Data Analysis is a process where steps are not well-defined. For different datasets, EDA may vary dramatically.

Today, we will be looking at a tabular dataset named Pecan Yield data (Pecan Yield Data).

The Pecan data has five columns. Row ID, Water per acre, Salinity level, Fertilizer per acre, and Pecan Yield. The data has 56 points. Each row of the data contains information about how much water was applied in a season, what was the average salinity level of the soil of the field in that season when the data was collected, the amount of fertilizer given in that season, and what was the amount of pecan harvested at the end of that season.

In the video, I use Pandas for most of the data analysis. I used Jupyter Lab as the editor. You can use Jupyter Notebook, Google Colab, Pycharm, Spyder, or any text editor of your preference. Just make sure that you have Pandas, Numpy, and MatPlotlib installed with the Python environment you are using.

The Jupyter notebook with the code is available in this zip file: Code.zip.

Python version of the code

The following code is a pure Python version of the code I wrote in the video.

Please save the code in a file named DataAnalysis.py and then run it using the following command on the terminal.

The command above should run the program given that your terminal has the Python command.

Here is the next part.